JP Morgan Pymetrics is a series of 12 neuroscience-based pre-interview games, designed to expose your “true self” on 9 dimensions: attention, effort, fairness, decision-making, emotion, focus, generosity, learning, risk tolerance, hence finding the perfect role for you in the investment banking industry.

There are myths around this assessment for the past years: “It’s a black box, we don’t know how it works.” But there’s still a way to help you understand the logic behind the test. This article will break it down into bite-sized pieces, explain the strategy and act accordingly to train yourself on desirable traits.

1. What is JP Morgan Pymetrics Game?

The JP Morgan Pymetrics Game is a pre-interview screening test from Pymetrics, customised for JP Morgan recruitment, consisting of 12 mini-games played in 30 minutes to evaluate candidates on cognitive, social, behavioural traits, then giving out a personalised report for each and navigating them to the most suitable role in JP Morgan.

The JP Morgan Pymetrics Game is placed in the second recruitment stage, between Resume Screening and HireVue interview. Candidates can either take the game on a computer or smartphone depending on their preference.

2. How does JP Morgan use the Pymetrics Game?

There are 12 games in total, designed for different objectives and underlying assessments, which can be classified into two types: the Strategy game and the Reaction game. The Strategy games, consisting of 7 mini-games: Digits, Balloon, Cards, Tower, Hard or Easy Tasks, Money Exchange 1 and 2, will test your logical thinking and adaptability. Meanwhile, the Reaction games evaluate your hand-eye coordination and perception via 5 mini-games: Faces, Arrows, Stop 1, Keypress, and Lengths. 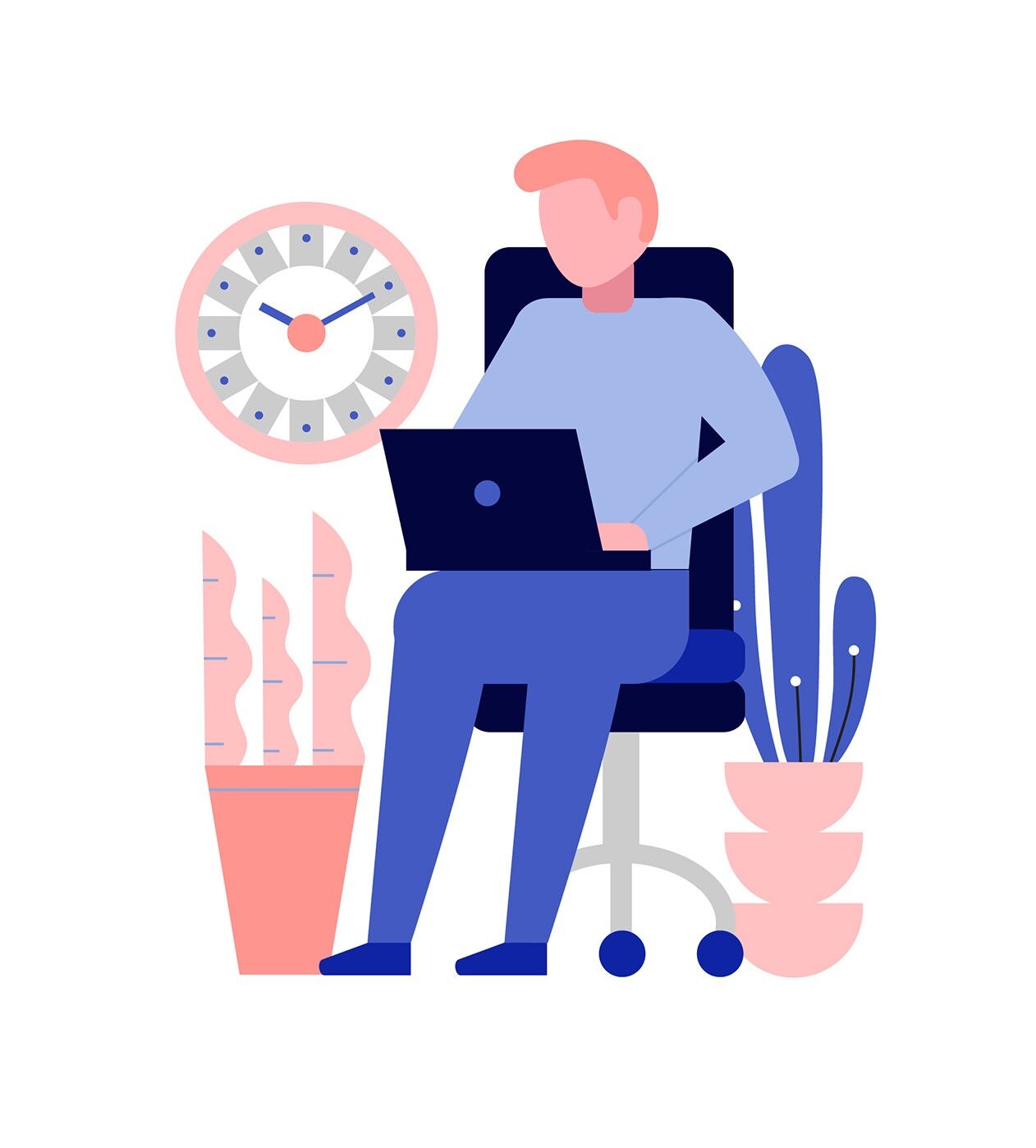 The JP Morgan Pymetrics Game follows a mini-game format, each lasts 2-3 minutes, adding up to a total of 20-30 minutes. Candidates can have a break in between the games, however, it is unable to pause during the game. Besides, all 12 games must be done, or else you will receive a reminder email.

Every candidate is allowed to take the test once every year, technically 330 days. During this time, the candidate cannot retake the test, and the results can be used for any application to Pymetrics partners (i.e. Credit Suisse, Black Stone, PwC, etc.)

2.3. The game tests on 9 core dimensions

After the game, candidates will have access to a personalised report, measuring their performance based on cognitive, social, and behavioural attributes. The JP Morgan Pymetrics Test assesses the candidate across 90+ social, emotional, and cognitive traits, which can be categorised into 9 groups: 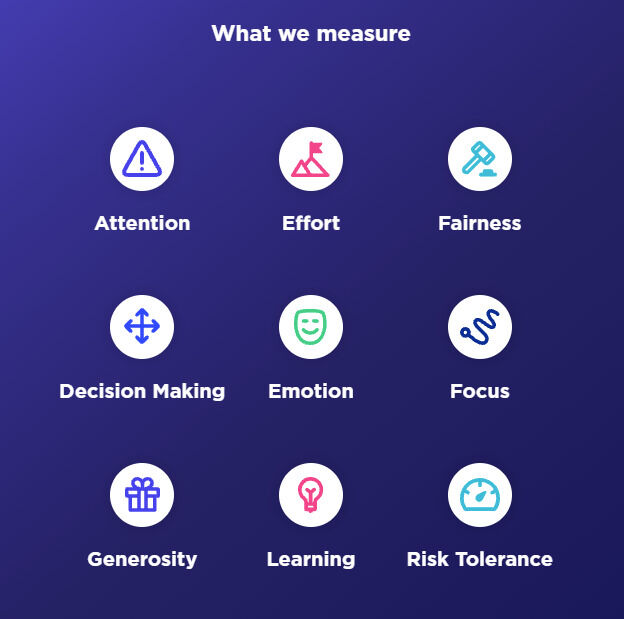 JP Morgan Pymetrics is a non-directional test, measuring personality traits through how a person approaches a problem, rather than specific solutions, and therefore have no right or wrong answers. Game results are compared against those of high-profile bankers to identify which interns might be a good fit for the company, thus making their evaluation more data-based than traditional means.

There is still uncertainty around how precisely the results might affect an interview offer. While some cases claim that candidates have been rejected based on Pymetrics test results, JP Morgan officially states that their decision is still made based on all application materials, including in-person and virtual interviews. But whatever the case is, knowing the test and having good preparation beforehand can genuinely enhance your chance to receive an interview. 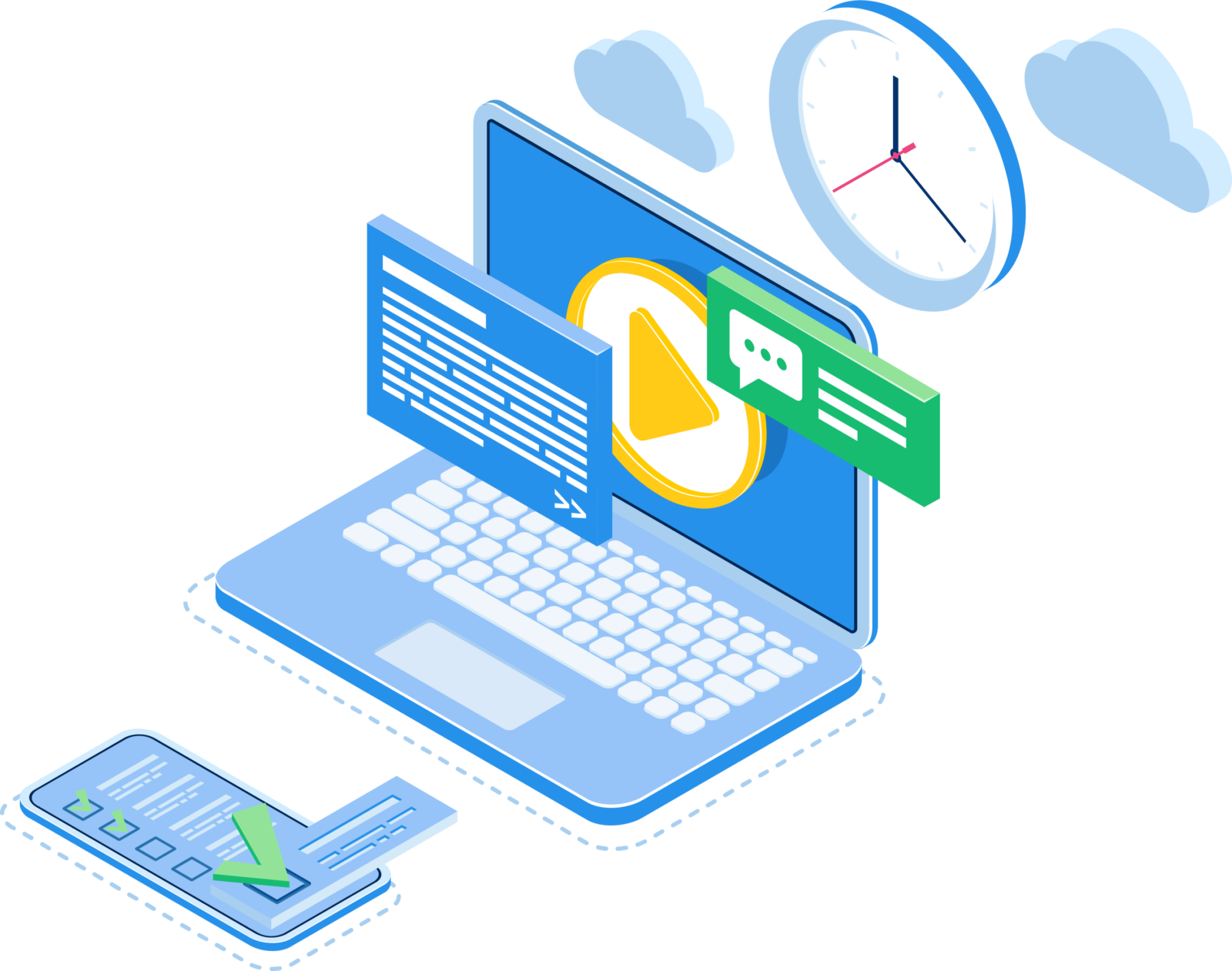 95% similarity to JP Morgan Pymetrics Game, designed by our partners at JobTestPrep – one of the leading career prep platforms in the market. The pack contains the following:

The game starts with you earning $10. Then it asks you to send any amount of money (up to $10) to your partner, who will receive triple the amount you’ve set aside for them. For example, if you choose to give them $2, he/she receives $6). In return, the partner may give back some/all/none of that money. After the transaction, you will be asked to judge how fair it was on a scale of 1 to 10.

Recommended approach: Offer a conservative amount only to show low-risk tolerance and display fairness by rating it high if the amount of money returned closely matches/surpasses the amount given out. 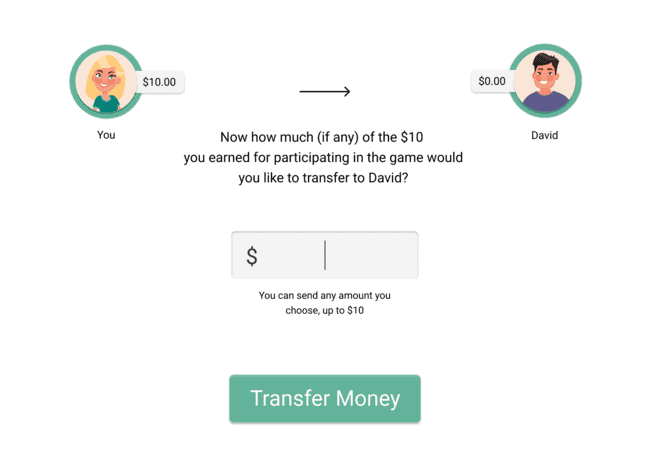 The game asks you to repeatedly tap the spacebar as fast as possible until told to stop.

Recommended approach: The faster your finger taps and the smaller the gap between your order and stop, the better. Be aware of the “Go!” as it might surprise you. Theoretically, the overly impulsive candidates will go over the mark (by continuing to tap after the stop order has been issued) and the overly deliberate candidates will tap slowly so as not to go over the mark. 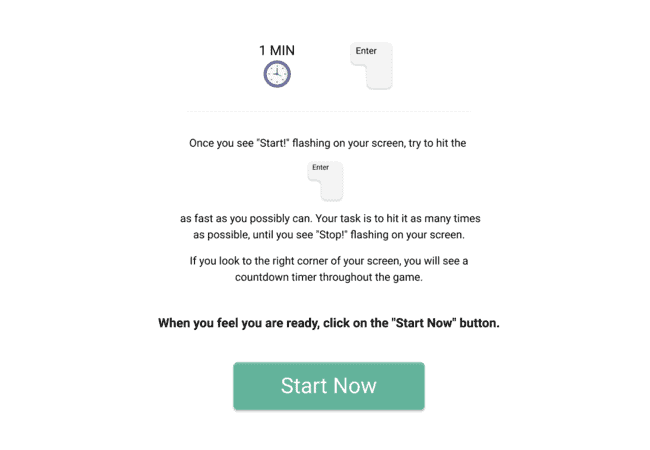 The game gives you a balloon and two options: (1) sell it for meagre profit, or (2) pump it up and sell it later for increasing profits. which you either sell for a meagre profit or pump it up to sell later for increasing profits. However, if you pump too much, it risks exploding, causing you to lose all the money for that balloon. The balloons come in various colours and behave differently. Pumping/ Selling continues until you’ve gone through 39 balloons, with the aim of accumulating the most money possible.

Recommended approach: Display low-risk tolerance systematically and cautiously. Take risks with the first 4-5 balloons to figure out the “danger zone” and the explosion probability of each colour, then spend the rest of the game under that limit. The game pairs you with a random participant, giving both $5 each and then an extra of $5 to either you or your partner. You are asked to give out or take this extra amount from the partner and rate the fairness of the transaction.

Recommended approach: Display moderate-high generosity by doing similar to money-exchange game 1: giving out a conservative amount of bonus, and rate fairly. The point is to keep your choice consistent throughout the game. 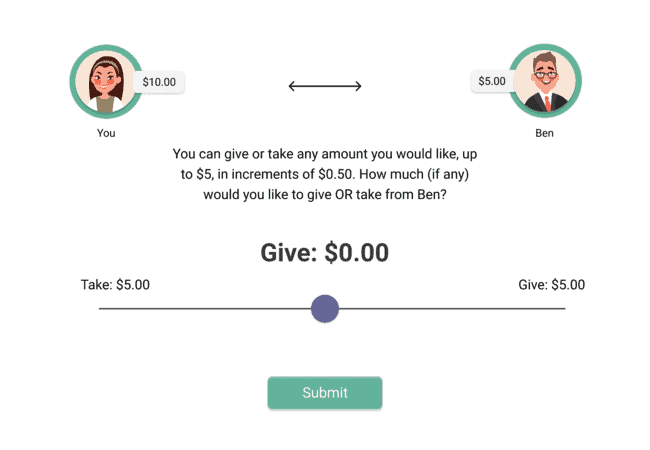 The game gives you increasingly long sequences of digits, each flash quickly on the screen at a time. The goal is to memorize as many digits as possible to write them down later. With every correct sequence, the next sequence will lengthen by one digit, and the game lasts until you hit 3 incorrect sequences.

Recommended approach: The point here is to prove that you can take in as much information as possible. Use a note to write the numbers down and be careful not to miss any digits while note-taking.

The game gives you two choices: perform an easy task and a hard task. The easy task requires tapping the spacebar 5 times in 3 seconds for $1.00, while the hard task requires tapping 50 times in 12 seconds for $1.24-$4.30. The task is completed once the number of taps required is reached. The chance of you actually receiving the rewards varies from 10% to 90%. The task is performed repeatedly for 2 minutes, and the objective is to accumulate as much as you can.

Recommended approach: 80-20 rule of thumb is the key, along with low-risk tolerance. It means you try to balance the effort spent and rewards received. Hard choices should only be taken if the prize and chance are high (i.e. $3.00 and 70%). Otherwise, take the easy one and wait for your next better chance. 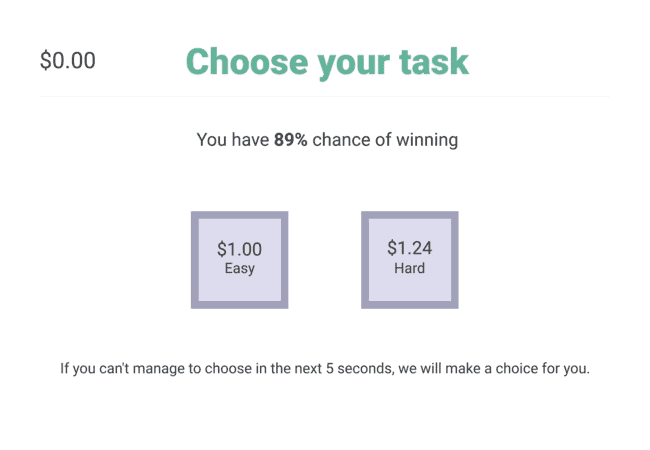 The game asks you to press the spacebar only when a red circle appears on the screen, while staying still if it’s a different colour circle. The task is repeated 15-20 times.

Recommended approach: This game is about multi-tasking – your brain must handle two tasks during this game: (1) timing your taps to match the flashes of the circles, and (2) deliver correct responses to the flashing colours.

The game asks you to draw cards from four different decks. With each card drawn, you can either lose or gain a random amount of money. You can draw from any deck and can switch decks at any given time. You will draw about 30-40 cards – until the game tells you to stop.

Recommended approach: A suitable strategy here is to take a structured approach with low-risk tolerance. Test each deck with 4-5 cards and see if there’s any pattern regarding the gains and losses. Then focus about 50% of the remaining cards on that deck, the other 40% on the “middling” decks, and 10% on the least profitable deck. 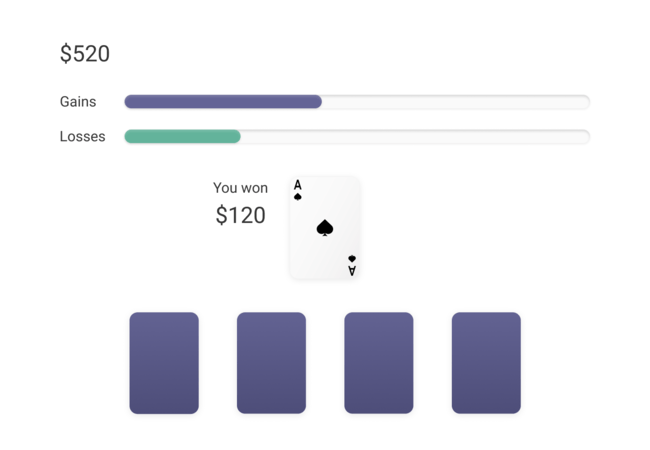 Recommended approach: This game is about multi-tasking, the logic is the same as the Stop 1 mini-game (matching your taps to the colour AND direction of the arrows)

The game flashes a face with a big mouth and a small mouth. The big mouth is only slightly bigger than the small one. You have to tap the right arrow or left arrow button, depending on the size of the mouth appearing. If the tap is correct, you have a chance to receive a small amount of money. The task is repeated 15-20 times. 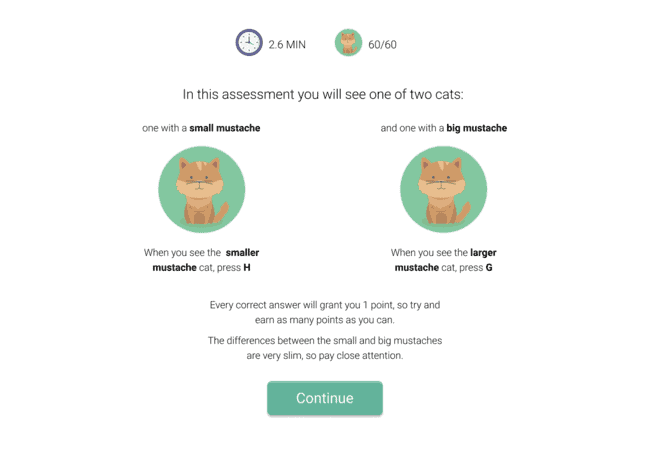 The game gives you three towers of stacked coloured discs. The goal is to rearrange these discs between the towers, moving one disc at a time, until your towers look like the target tower appearing on the top of the screen. The fewer moves you use, the better. You have 2 minutes to complete the task.

Recommended approach: This game is to see whether you approach a problem/decision with structure and strategy. Avoid moving the discs randomly – instead, take time to map out the necessary moves in advance – preferably with a note. 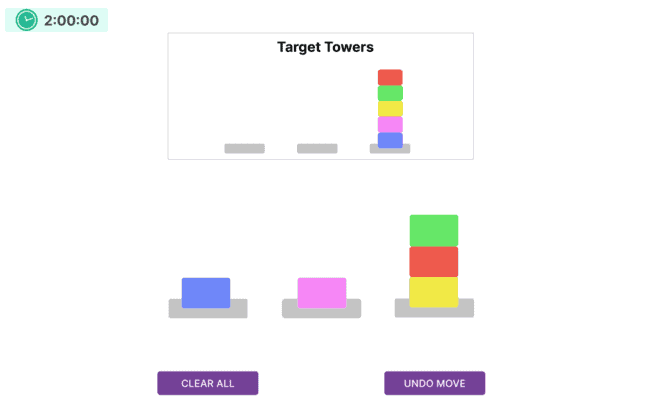 The game gives you the portrait image of a person, which may be accompanied by a paragraph providing the context for that image. You need to choose between 10 choices about the emotion the person is currently expressing.

Recommended approach: This game tests whether you rely on gut feeling and facial expressions to figure out a person’s emotions, or on contextual information. Ideally, when context information is present, use it as the basis to narrow down the possible options – consulting are fact-based people, and in reality, people from high-context cultures (such as East Asians) do a great job not showing their emotions on their face. 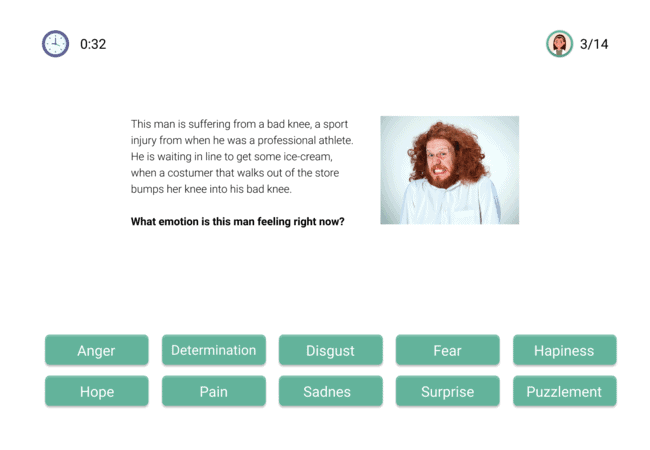 Playing alternative games with similar format is the best way to get yourself familiar with the formula and logic behind the game, and reduce the frustration if you first time approach these types of cognitive games.

Tip 2: Fake it until you make it

After all, the game is designed to identify individuals that best fits the firm through a set of 9 core dimensions. Trying to practice these traits daily can help you immerse yourself in a banking mindset and train the necessary skills to become a qualified i-banker.

Tip 3: Rest well and make reservations before the test

The game is short, but quite challenging. Therefore, ensure that you perform the test in a fully awake and energetic mood, in a quiet environment with no distractions. Also, prepare the technical devices in advance and make sure the Internet connection is good.

Tip 4: Prepare some snacks and take short breaks between mini-games

It is not highly recommended to play all 12 games in a row with no break. JP Morgan Pymetrics Game allows you to have a break between the mini-games, so just take the chance. Refreshing yourself with a few minutes of rest and some healthy snacks before getting back to the battle.

Tip 5: Don’t pay too much attention to the assessment criteria

You should know the drill and practice playing it ahead of time, not right before the game. By now, it is time to focus on the work at hand, adjust your strategy as you had prepared, and deliver the best results.

READ MORE
What do Investment Bankers do?

Information interviews are an excellent networking strategy—especially if you did not attend a top-tier business school where Goldman Sachs, JPMorgan,...